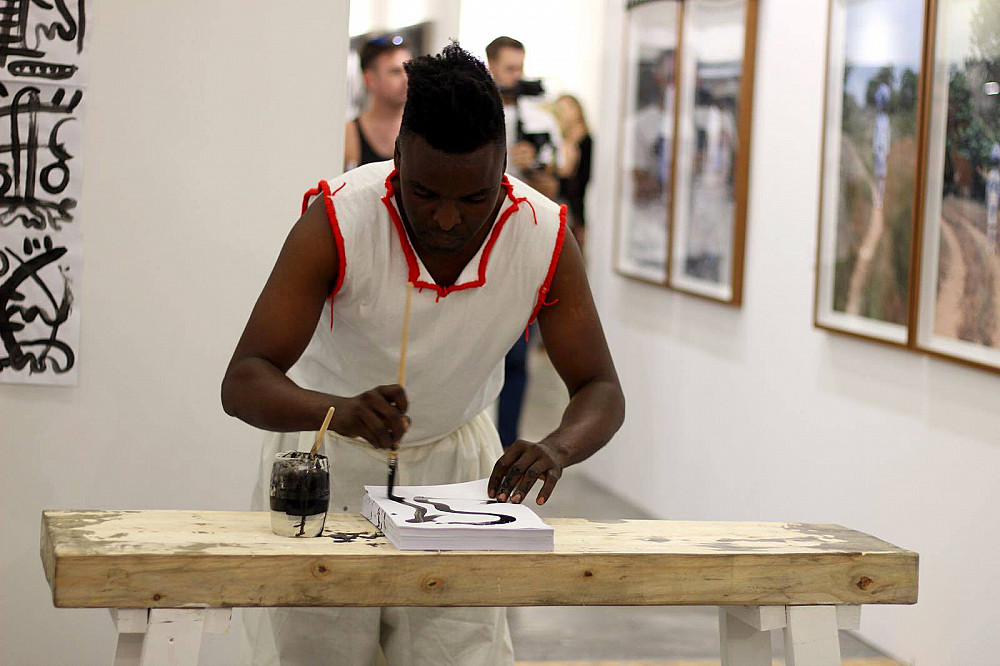 THIS IS NOT A WHITE CUBE Gallery (TINAWC) will be performing for the first time at the 2018 Cape Town Art Fair exclusively representing an individual project by the Angolan artist Januário Jano. The 6th edition of the Cape Town Art Fair will be held on 16 and 18 February at the Cape Town International Convention Center in South Africa and will be curated by South African Tumelo Mosaka and will be attended by the most important galleries in Africa, of the continent.
Januário Jano will present works from his most recent work in the "MPONDA" series accompanied by the photographic installation "SENHÔ" and will be presented in the "Tomorrows / Today" special section, which aims to highlight emerging artists who will be tomorrow's leading artists. The artist will also present a Live Performance "KALAKÁLA".
Both the "MPONDA" series and the "SENHÔ" photographic installation and the Live Performance "KALAKÁLA" are part of a project that the artist has been developing in recent times, with a specific focus on exploring the relationship between past and present, using elements of personal and collective memory, contextualized in the recent history of Angola, with a particular focus on the "ambundu" people and their trajectory.

| JANUARY JANO BIO
Visual artist, born in Luanda (Angola), Januário Jano lives and works between Luanda, London and Lisbon. In 2005 the artist completed his undergraduate degree at the Metropolitan University of London, England, and since then he has been involved in research projects that have been at the center of his artistic work. Januário Jano works mainly with painting, installation, video and photography, using media and material mix to develop a relevant body of work in the rituals of his work.
Founder of the Pés Descalços cultural platform, the artist participated in the Hangar (Center for Artistic Research) residency program in Lisbon, with the support of the Calouste Gulbenkian Foundation, ending the year with a participation in the 1st Edition of Lagos Biennial (Nigeria). In 2018 he is a guest artist at the renowned Dakar Biennale, taking place from May 3 to June 2 in Senegal. In 2016 he was awarded with Art Laguna Prize in the Business for Art category, one of the most prestigious art awards in Venice, Italy. In 2015, he participated in the collective exhibition, "UNORTODOXO", in the Jewish Museum of New York, curators Jens Hoffman and Kelly Taxter. As one of the most prominent Angolan artists according to art critics, Januário Jano was in 2013 one of the guests of the Goethe Institut-Angola as a visiting artist to participate in the project "Africa Em Movimento" in Doual Art, in the city of Douala in Cameroon. In 2014 a Beyond Entropy project was curated by Paula de Nascimento and Stefano Rabolli Pansera on the "Ilha de São Jorge".